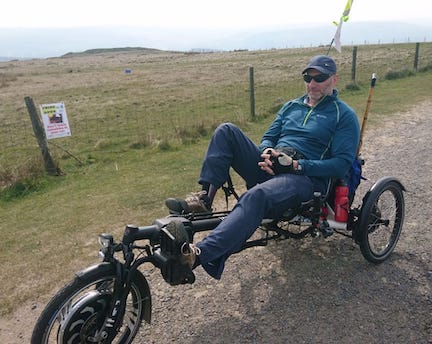 In 2010, Steve sustained had a stroke aged 49, paralysing his right side and affecting his speech. After 12 weeks of rehabilitation he managed to restore the function of his arm and his speech but restoring his full leg function proved more difficult.

At about 12 weeks, Steve’s rehabilitation plateaued but he continued exercising as his physiotherapist advised, including getting an exercise bike. Steve followed his physio’s suggestion of peddling backwards to try to fire up his  hamstring  muscles but discovered that the bike wasn’t designed to be peddled backwards – it broke twice.

After about 3 years of going to the gym, he still found it difficult to lift his right foot more than 6” from the ground. He then discovered Sheffield Cycling 4 All. He’d seen a news article about injured soldiers so searched online for local “disability cycling”. “What a turning point that was” he says. Six years after sustaining his stroke, he started cycling at Sheffield’s inclusive cycle hub  (where is your nearest hub?) and within 5 weeks his leg was improving.  Now he can raise his foot about 12″ from the ground. And he adds “it is is much more fun than going to the gym”.

He now has his own Hase Kettwiesel Evo which has electric assist and automatic gears, costing about £5k (potential funding sources)  and like any other keen cyclist, has other cycles too. Steve is now on Strava (an app for cyclists recording their routes and times etc)  and cycles about 50 miles every week, including with a local group  – Quirky Cycles – whose members all use non-standard cycles.

He volunteers at Sheffield Cycling for All where he provides not only support, hope and inspiration for other people post stroke, but a very practical service at the end of sessions. The cycles need to be returned to the sheds which, being Sheffield, are up a hill from the session base. With his electric assist recumbent, he is able to return cycles linked in a chain all in one go without the effort needed if a manual cycle was used.

Steve’s experiences of cycling  – together with those of another man who loved to cycle post stroke – have led to the creation of weekly cycle sessions just for people post stroke. You can find out more by contacting Sheffield Cycling 4 All.

Which topic is of most interest?